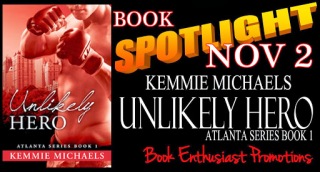 Erin never would have expected to fall in love. Never. Not with her past, and not with her fear. She never dates; she doesn’t even allow herself friendships. She doesn’t trust her judge-of-character skills enough to allow anyone close…until Marcus. With him, a deep connection happens in spite of the walls she’s so carefully constructed around herself.
Marcus uses his self-confessed rage to fuel every part of his life. He survived the severe abuse of his childhood and learns to harness all the leftover anger into MMA fighting. His rage takes a rest, however, the moment he experiences Erin’s presence. Marcus dares to make the step that leads to love, one with the potential to heal them both.

I absolutely love to write. Seriously. I smile darn near the entire time. I’m a total word-nerd.

But even more, I love a good love story. I reread the first kiss a few times before I read on…even in my own books. That moment gets me every time no matter how often I revisit that beautiful connection. I dive into every story to the point where I have so many fictional boyfriends that I can’t keep track of them all.

In the world of reality, I have a loving and tolerant husband who smiles and rolls his eyes every time I tell him about my latest fictional love affair. I have two personality-rich pre-teen boys who keep me on my toes. I have a psychotic Golden Retriever (I was told those don’t exist…) and a cat that rules our house. I used to be the queen. Our regal feline has usurped my throne and demoted me to Prime Minister.

I studied English/Journalism at Miami University in Ohio, have a Master’s Degree in Secondary Education from the University of Dayton and I spent five years teaching even more personality-rich pre-teens. For some sick reason, I actually enjoyed teaching junior high. Now as a stay-at-home mom, I’m clinging to that status by throwing my hat in the author’s ring and hoping I get to keep it there..

For the first time in his life, he had the urge to take a woman in his arms and just hold her for hours. He wanted the warmth of his body to melt five years of ice from hers.

He would take as long as needed to break through the depth of the glacier she had formed around herself. He wouldn’t let her go until she felt soft, warm, and safe in his arms. If she’d let him. He knew exactly what he needed to write that night.
I will never do anything to hurt you or break your trust and I know I’m probably scaring you right now for asking, but you haven’t let anyone in. I think you need that, even if you’re scared of it. I want you trust me. I want to help. You’re safe with me. I’m strong enough to protect you. Will you let me?
~Marcus Walker
Suddenly those notes that brought her close to him seemed like a path to her undoing. She had been so safe and closed away from people for so long, she didn’t even realize she had let him in as far as she had. Sharing herself had been too easy in that book, but now look what she had done! She was open and exposed and he wanted to meet her outside of the safety of her journal.
The thought of meeting him terrified her — but not because he scared her. That wasn’t the problem. She was so scared of being vulnerable again. She had worked so damn hard to keep that from happening. And she was scared because she wanted to meet him. Allowing herself the potential to feel something, even something good, made her want to shrink back into the chasm and stay there.