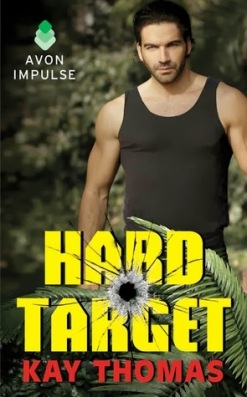 
The first installment in the Elite Ops series, featuring sexy ex-military men … and the women who rescue their hearts.

Former DEA agent Leland Hollis wasn’t planning on being a hero. Recovering from an injury sustained during a drug bust gone wrong and with more personal demons than he cares to admit, he wants nothing more than peace and a chance to rebuild his life. But when Anna Mercado’s crazy ex shows up wielding a baseball bat, Leland can’t ignore his instinct to help. And after her son is kidnapped, Leland agrees to deliver the ransom into dangerous territory south of the border.

Anna has no choice but to go with this stranger she’s just met if she ever wants to see her son again. But getting the boy out of a violent cartel region involves risking everything. And for that Leland will have to convince Anna to do the scariest thing of all … open her heart and trust him.

I enjoyed this book by Kay.  This book includes passion, laughs, heartache, kidnappings, murder, betrayal and a few gun fights.

Anna Mercado is on vacation with her husband and son when she overhears her husband planning her murder and her son’s kidnapping.  She goes on the run and is hiding in a hotel when he tracks her down.  Leland is staying at the hotel and comes to her aid and saves her.  When her son is kidnapped they team up.  He is going to protect her no matter what as he thinks he might be the reason they took her son.

Anna is slowly falling apart and is trying her hardest to keep it together.  When they find out exactly what the kidnapper wants Leland is furious.  He gets even more furious when Anna agrees.  No way is he letting her give the kidnapper what he wants.  How is he going to save everyone and get them all out of this mess.
Grab the book to find out.
Leland is a strong willed man.  He has issues of his own but is determined to save Anna and her son no matter what.  Even if they both hate him after.  Anna has had to be strong for a while but she is slowly unraveling.  Can she really trust Leland to get her son back?  Does she even have a choice.


A very good read.  Kay delivers a suspense fueled love story like no other.  You know at the end of the day people are going to be furious about the steps that were taken for the outcome to be good.  They will just have to learn to deal with it.

I didn’t grow up burning to be a writer. As a child I wasn’t even much of a reader until fourth grade. That’s when I was stuck at home with the flu and my big sister read THE BLACK STALLION aloud to me. For hours I was enthralled—shipwrecked in a foreign land and riding an untamed horse across the hot desert sand. Then tragedy struck. My sister lost her voice. (I think she caught my flu.) But I couldn’t wait to hear what happened to Alec Ramsey—so I picked up that book, finished reading it by myself, and went in search of more adventures at the local library. Today I live in Dallas with my husband, our two children, and a shockingly-spoiled Boston terrier.

My next novel will be published with Avon Impulse in November 2013. HARD TARGET is the first installment in a three-book romantic suspense series titled ELITE OPS, featuring sexy ex-military men…and the women who rescue their hearts. For excerpts, book trailers, and more—visit my website.

“Take Zach from the party before the guests arrive. We won’t dump her body until the designated time. It’s all been arranged.”
Anna stopped in the doorway of the Presidential suite, her husband’s words abruptly penetrating her lust-fogged brain.
“No, I’m not worried. Haven’t you heard? Mexico is the land of vicious drug cartels and random violence. My wife will be a sad statistic.”


Was this a dream?

She felt the cold Italian marble beneath her bare feet and recognized Max’s voice in the adjoining room, but she didn’t wake up. The seductive words he had whispered moments earlier on the beach still resonated in her head.


The only thing I want you to wrap yourself around is me.

She’d come up immediately when Julia had volunteered to get Zach and the cousins’ meals from the hotel’s beach grill. But on the way to the room she’d been calling herself all kinds of a fool. She and Max were on the verge of officially separating even though they’d been living apart for several months. The counseling wasn’t working. Having sex was a terrible idea. Even comfort sex.
Yet he’d been so attentive, so different on this trip. So anxious to please her, while keeping his temper completely in check. Last week she’d been considering which attorney to use in a divorce. Now she was just grateful she was standing here overhearing his phone conversation in the next room.
Her thoughts raced and her blood chilled, but her feet were glued to the imported floor. She stared across the opulent suite’s living room to the open balcony doors. The heir to the Mercado Tequila fortune settled for nothing less than the finest, even when planning his family’s demise.
An ocean breeze blew through the room, ruffling her hair like a playful lover. The Gulf of Mexico was just as blue as it had been ten minutes ago when Max kissed her on the sand, yet everything had changed. She was listening to her husband order their son’s kidnapping and her murder.