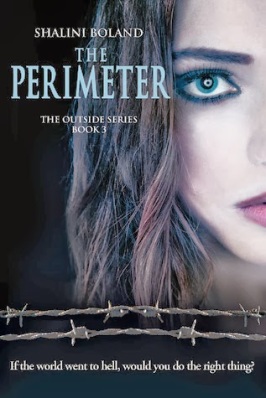 In this fractured world, a sinister force is coming for Riley, and the only things keeping her safe are a perimeter fence and the people she loves. As her life is threatened, she must make impossible choices. But help comes from the most unlikely of places, and all Riley needs to know is: who can she really trust?

Meanwhile, a repentant killer searches for peace and salvation, but what he gets is the exact opposite. Now he’ll have to make the hardest decision of his life.

The Perimeter is a darkly captivating dystopian tale of adventure, danger, love and redemption that will have you on the edge of your seat and up at night turning the pages to find out what happens next . . .

Set in the near future, these three heart-stopping novels follow Riley as she overcomes the murder of her younger sister by tracking down the killer across a post-apocalyptic Britain. At the same time, she is forced to take on the might of a twisted regime intent on conquering the nation. The series is packed with action, suspense, drama and dystopian adventure. 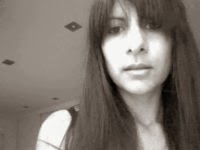 About Shalini
Shalini lives in Dorset, England with her husband and two noisy boys. Before children, she was signed to Universal Music as a singer songwriter. Now, writing novels has hijacked her life and she is usually to be found with a laptop welded to her fingers and the house in a permanent state of neglect.
Connect with Shaini:
FACEBOOK | GOODREADS | TWITTER | WEBSITE | PINTEREST
The Perimeter Excerpt
The two men were youngish with beards, wearing layers of filthy clothing. One of them had a face-full of piercings – lip rings, eyebrow studs and a hoop through his nose. They were both skinny and hollow-cheeked with deep-set eyes. As they drew closer, I saw pure hostility in their faces and it took all my strength of will not to throw the truck into reverse and gun it all the way home.
‘What’s your business here?’ the man with the nose hoop called out.
I lowered the window a fraction. ‘I’m a friend of Lou’s.’
‘Lou?’ They took a few steps closer, their weapons still lowered.
‘Yeah. Fair-haired girl with two younger brothers. Lives up close to the compound wall.’
‘I know who Lou is,’ nose-hoop replied. ‘What d’you want with her?’
‘She helped me out yesterday. I’ve come to say thanks.’
‘Get out of the truck and I’ll fetch her over.’
‘I’d rather stay inside till she gets here if that’s okay.’
They stopped a few yards away and talked to each other in low tones so I couldn’t hear. By now, several other gypsies had come close to the wire fence to see what was going on. I’d started to cause a bit of a stir – exactly what I hadn’t wanted to do.
‘Out of the truck,’ nose-hoop repeated, aiming his rifle at the windscreen. ‘Slowly. Hands in the air.’
I hadn’t come here for a gunfight, so it didn’t look as though I had much choice. I would have to do as he asked.