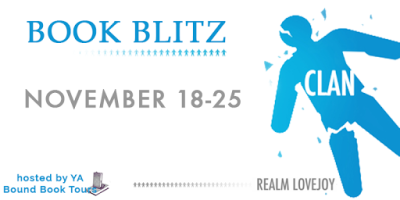 Summary from Goodreads:
Clans are Unity.

No variation. No deviation.

On Clades, to be a Clan is to be an exact copy.
A perfect society cloning themselves to survive, even as the zombielike Frags threaten to overrun them on an unforgiving planet.

Clan 1672 (privately known as Twain) was never supposed to survive the Incubation Tank.
But he did. Illegally.
He is different from the other Clans.

A secret that could destroy him.

Kirkus Reviews: “In this fast-paced novel, Lovejoy uses economical prose while developing the story’s characters and setting in detail. She also meets the challenge of creating memorable characters in a world of identical people…“ (Read more here!)

About the Author
Realm Lovejoy is a writer and an artist. She was raised in Washington State and the alps of Nagano, Japan. Her father is a Japanese ex-monk and her mother an English teacher from Rhode Island. Her art is influenced by both the East and the West.

Realm aspires to tell stories through her writing and art.
She is agented by Jessica Regel.
Her upcoming YA sci-fi novel is titled CLAN, due 2013.
Author Links:

Excerpt:
Twain drew in a breath. His sponsor moved toward the window. He put his hand to the glass and did a quick, complex tap sequence with his fingers. The frosted cover went across halfway, revealing transparent glass.
Bright blue sky. Twain’s eyes widened.
Twigg gestured for Twain to come closer. “Be careful now,” Twigg warned. “Make sure nobody sees you.”
Twain eagerly stepped forward and peered out, his eyes taking in greedy gulps of the world outside. Concrete buildings. The street. Figures walking across the pavement—five of them. Boys his age wearing the same uniform as his sponsor. More joined them. There were ten, twelve. As if multiplying, a dozen more Clans walked past. Countless numbers of them! Twain’s heart yearned to be with them. They looked exactly like him, except that their hair was cut close to the scalp.
Twain touched his own hair, which Twigg had allowed to grow longer. “Our hair is different.”
“You don’t need it cut often,” Twigg replied. “Nobody sees you.”
“But we are the same once our hair is cut. We can go out there.”
“Look closer.”
Twain narrowed his eyes and inspected the boys. It was difficult to see them in detail from afar. Their eyes were fierce, but it could be because they were squinting in the sun.
“We are the same,” Twain repeated.
“You can’t see the difference?” Twigg tapped the glass again.
The frosted sheathing slowly slid back. Twain made a cry of disappointment, trying to keep his eyes on the boys for as long as possible.
“I’ll show you,” Twigg said.
“Father,” Twain implored, pointing at the window. “Please, let us see them again. We…” Twain stopped.
Twigg removed his glasses for the first time. The glasses had been like the windows—hiding something.
His sponsor’s irises were dark.
Twain gasped. “What happened to your eyes, Father?”
Twigg’s eyes softened with something like pity. Is that how Twigg’s eyes always looked behind his glasses? “Nothing. We Clans all have brown eyes.”
Twain glanced back at the frosted window, remembering the boys’ eyes that seemed darker.
So… I can’t get better.
“We understand, Father. We are sorry for asking questions.” Twain walked past his sponsor, his steps quickening as he got farther away.
Once he was in the bathroom, his head spun. Pain seeped into his heart. He approached the mirror. His irises were so light they almost matched the white walls behind him.
Twain’s vision blurred, his reflection dissolving away into a fog like the figures he had watched for the past seventeen years.
He was a glitch, hidden from the perfect world—never to be healed.
***GIVEAWAY***
1 Signed Paperback + CLAN Button + Signed Illustration from Paperback (6×8) (US only)
6 Paperbacks of CLAN (US only)