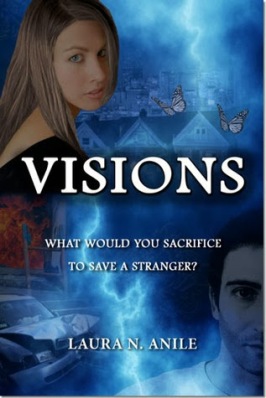 What would you sacrifice to save a stranger?

Isabel Cartier is career-driven and a little self-obsessed. Her future has been carefully planned—until something mysterious happens. When Isabel begins to experience premonitions of strangers in potentially life-threatening situations, she must decide what she is willing to do—and sacrifice—in order to save the people in her visions.

As her premonitions progress, the level of risk to her own life escalates, and she’s thrown into an unknown world that will put more than just her career in jeopardy.

It is only when her life spins out of control that she is able to take chances that she never thought possible—including opening her heart to love.

There’s Matt, the handsome stranger she saves from a terrible accident. But will she ever see him again? Then there’s Jeremy, her thoughtful neighbor who’s down on his luck. Both will shape her path and leave her breathless. But it’s another man, who she sees in her visions over and over again, who will leave her questioning everything. Does he have nine lives, or is it up to Isabel to figure out the parameters of a game she doesn’t quite understand in order to truly save him?

Visions follows Isabel’s journey to find out if she has the courage she needs to save the people in her premonitions, and how, ultimately, their lives are intertwined with hers. 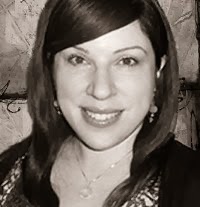 Laura has had a lifelong love of writing, which she explored in a successful marketing career before penning her first novel. She is fascinated by the ideas of fate and interconnectedness, central themes in her story. She loves all things humorous, laughs too loudly and finds her own jokes amusing. She has a passion for traveling and exploring the world but has a phobia of suspect hotel rooms with questionable hygiene. And, oh yeah, she isn’t clairvoyant and doesn’t own any crystal balls. In addition to ‘Visions’, she has also written a collection of short stories, entitled ‘Unmasked Secrets’.

For more information, please go to

www.lauraanile.com.
Connect with Laura:
FACEBOOK | GOODREADS | TWITTER | WEBSITE
Excerpt:
“I’ve been monopolizing a lot of your time lately, haven’t I?”
“I’ve wanted you to monopolize me,” he said in a low voice, his salacious grin adding heat to his eyes.
I felt my cheeks warm as I took his hand to lead him in. “Are you staying tonight?”
“I thought you’d never ask.”
“Do you have plans tomorrow night?”
“What do you have in mind?” he asked in the same suggestive tone.
“Whatever you want,” I played along.
“Really? Well that could be dangerous,” he breathed mischievously. “What time will you make yourself available to do whateverI want?”
I giggled at his devilish grin. “Eight?”
“Eight is perfect.”
“So what exactly do you have in mind?” I asked coyly.
“Be at my place at eight. The rest of the evening will be a surprise.” He paused, cocking his head. “Anything goes,” he teased, a dangerous glint in his eye.
“Okay. I’m looking forward to it. I think.”
“Not as much as I am, my slave girl,” he chuckled, his brows dancing.
“Slave girl? You’re starting to make me nervous…I don’t want to re-enact Fifty Shades of Grey, if that’s what you’re thinking?”
His laugh didn’t subdue my nerves—there was something devious in it.
I knew I wasn’t getting any more out of him; whatever he had planned, he wasn’t giving it away. Given I’d only just discovered his cooking skills, I hoped he’d be flaunting his domestic capabilities again. But the heat in his eyes led me to believe it was something else he had in mind. I was a little nervous, but flushed with eager anticipation. Whatever was on the evening agenda, I knew I was in good hands. Warm, masterful hands…
I snuggled closer to him and breathed in his familiar scent.
“I might give you a preview,” he murmured in my ear, his voice deepening as he tugged me to the bedroom and pulled me onto the bed. A wave of heat immediately ignited within me and my hands found their way under his clothes. The feel of his skin against mine, his body moving with mine, took my breath away.
Later, I fell asleep in his arms, my last thoughts of the unbridled anticipation of whatever he had in store for the following evening.
It started as it usually did. Me looking down at the multiple-choice test with his hand on my shoulder. But then the scene shifted and I was no longer in the exam room looking at a piece of paper. A piece of paper couldn’t physically hurt me; what was now in front of me could. Absolutely terrified, I dared to take a glimpse at the man holding the gun. He was dressed all in black, wearing a riding jacket over a T-shirt and jeans. His face was completely obscured by the black helmet he wore. I glanced behind him and saw my terror reflected back at me in the eyes of the woman behind the teller. There were four other people in the bank, besides the three tellers. A woman, with a young girl who appeared to be between ten and twelve, and two men. One of the men looked to be in his forties, and wore a navy suit with a gold tie. The other was in a black suit with his back to me.
The young girl began screaming; a scream that made your blood run cold. Her mother instantly tried to placate her, eventually smothering her mouth when those attempts failed. That only intensified the screaming, agitating the girl more.
The gunman flew into a rage, demanding the girl be silenced before he silenced her. His hand twitched in fury. Could he honestly harm a child?I wondered, as fear crashed over me. The interminable screaming shrilled through the bank as the girl thrashed in her mother’s arms. My skin tingled, the air electrified with trepidation.
The gunman pointed the weapon directly at the child, narrowing his eyes. Time slowed down, like someone hit pause.
A feeling of complete and utter helplessness reverberated through me as I frantically scanned the room, searching for some kind of help to magically materialize.
A number suddenly flickered in my vision, flashing like a number on a screen: 12.19. I blinked; it felt like a camera flash had just gone off in my eyes. Then I noticed the calendar. All I saw was Thursday before the scene began to move once more, still in slow motion. My attention instantly returned to the gunman. His finger inched towards the trigger. His whole body was shaking.
Panic crippled me. This was it and I had no idea what to do.
A growl erupted from the gunman’s throat as his feeble control shattered and his finger pulled back the trigger.
There was no time left to decide, to think. There was only time to act. Instinctively, I jumped in front of the young girl as I heard the deafening crack of the gun being fired.
I jumped so violently that I awoke, drenched in sweat.