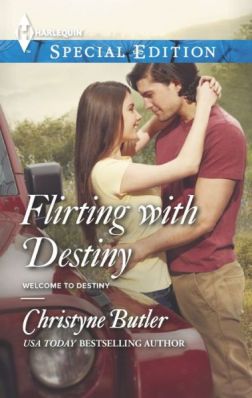 Flirting with Destiny  by Christyne Butler

Back of the book

USA TODAY bestselling author Christyne Butler presents this story of healing, hope and love in her Welcome to Destiny series

It’s a tough road to recovery for Devlin Murphy after a helicopter accident leaves scars that are more than skin-deep. But there’s a new girl in Destiny, Wyoming, who’s got the healing touch. Sure, Tanya Reeves’s approach—acupuncture, anyone?—makes Dev’s eyes roll. The woman also makes his heart rev up like no other.

For her part, Tanya can’t believe it when she first runs into this fling from her past. Dev doesn’t even recognize her! Even crazier—history is repeating itself with this irresistible man. And Tanya has to ask herself: Who’s healing whom?

I enjoyed this book by Christyne.  This book includes passion, laughs, heartache, pain, and betrayal.

If you have not read the below I would recommend reading those books first.
The Cowboy’s Second Chance by Christyne Butler
The Sheriff’s Secret Wife by Christyne Butler
A Daddy for Jacoby by Christyne Butler
Welcome Home, Bobby Winslow by Christyne Butler
Having Adam’s Baby by Christyne Butler
Devlin “Dev” Murphy was in a helicopter accident with his brother that leaves him blaming himself for the entire event as he was the pilot.  He was hurt and feels the entire accident was his fault.  He is feeling so guilty that he is not participating in his physical therapy as he should.  His friend Mac who is also his sponsor for Alcoholics Anonymous for the last 6 years introduces him to his granddaughter Tanya Reeves.  She is in town for 6 weeks and then leaves to go to a school.  He wants Devlin to try acupuncture. Only problem is Dev is deathly afraid of needles.
What Dev does not know is that he has already met Tanya but does not remember as it was before he was sober.  Tanya finally tells him about meeting before and he is embarrassed about how they met and knew each other.
His brothers are keeping something from him and when he finds out if is really upset and feels betrayed.  After they explain the situation he is still not happy but has to deal with the hurt that they kept it from him.
As they work together to heal Dev’s body and mind they grow closer and start to fall for each other.  But Tanya is leaving how can they still be together when Dev is afraid to fly and she is going overseas?  He would never make her choose so what is he to do?
The chemistry between these two is great.  Love both the characters.

Look forward to the next book in this series. 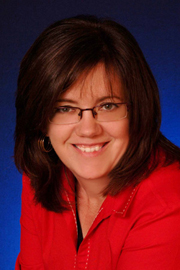 Thanks to an aunt’s love of genealogy, Christyne discovered both Louisa May Alcott and Harriet Beecher Stowe are members in her extended family tree on her mother’s side, so she firmly believes her love of writing has always been her destiny.

Her father served in the Air Force for twenty years which resulted in her birth in Taipei, Taiwan and she spent her youth growing up all over the world before her family settled in New Hampshire in time for her to attend high school. She followed in her family’s rich military history and joined the United States Navy where she fell in love with romance novels after someone remembered women were serving aboard seagoing vessels and sent a box full of paperback romances to her ship, the USS VULCAN AR-5.
She started pursuing her own writing in 2002, sold her first ever ‘finished’ manuscript in 2006 and made her first sale to Harlequin Special Edition two years later! She writes contemporary romances full of life, love, a hint of laughter and perhaps a dash of danger too. Christyne loves the challenge of the boy-meets-girl, boy-loses-girl, boy-gets-girl-back and the journey of joy and hardship two people go through. And there has to be a ‘happily ever after’ or she’s just not satisfied.
When she’s not writing, she can be found hunting for treasures at yard sales and antique fairs to add to her collection of memorabilia of women who served in the military, watching classic romantic movies and the great movie musicals of the 40′s and 50′s, and reading books by her favorite authors.
She lives in central Massachusetts with her family, a four-footed double-pawed black cat who rules the house and a shelter-saved pup named Harley (short for Harlequin) who really thinks he’s a cat too! Christyne loves to hear from her readers.
Read an Excerpt

“Hey, cowboy.” The blonde barmaid leaned across the three-foot expanse of aged wood. “I know just what you need to make your day complete.”